Under a Bridge in Venice 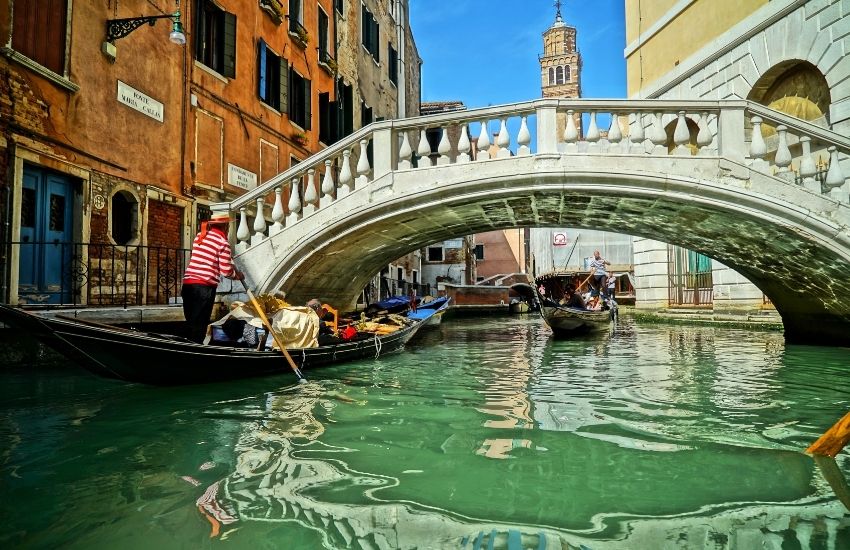 Our gondolier pushed away from the wharf and my wife and I began our romantic journey on a gondola on the canals of Venice. Kind of honeymoon. We’d only been married four years.  But there was a problem. The gondolier was not singing.

“Isn't he going to sing?” she whispered to me.

“Aren’t you going to sing?” I asked aloud.

“No singing at all?” I said, even louder. The gondolier ignored me.

At that precise moment, our gondola glided under a wide stone bridge, a long, wide, low, stone bridge. I coughed. It coughed back. I hummed and we were surrounded by a murmuring of sound. So, I broke out, full voice, bass-baritone, into O sole mio!

My voice filled the cavern under the bridge as if we were in a deep well or tunnel. And by the time I’d reached the verse “Che bella cosa … na jurnata’e sole…” again, another gondola suddenly entered our tunnel. A song-less gondola. Then another, and another… till there was a flotilla of song-less gondolas clustered alongside us. And when I ended with “… Sta 'nfronte a te! Sta 'nfronte a te!” The flotilla burst into a thunderous chorus of “Bravos” and “Ancoras,” and one lone, “Good on ya mate,” obviously from a lost Kiwi or Ocker.

So, I moved on to Sorrento – “Vide 'o mare quant’è … “ – but before I could get to “… bello”, our gondolier couldn’t stand the shame of it any longer and burst into song, full, corrugated tenor voice, with “… Torna a Surriento, Famme campà!”

I stopped singing immediately, and let him go with it. Well, we’d come out from under the bridge anyway, so he was welcome, I thought. The audience applauded.

My wife took my hand and squeezed it.

“Italians have contributed the most to human civilisation,” says Avio as we stand in the street near the bar that he can’t go into again. “Leonardo and Michelangelo, Dante and Brunelleschi. Wouldn’t you agree?”

“I agree,” I say, “that Italians have been immensely important in our growth as a species, especially during the Renaissance, but the greatest single contribution to human knowledge and civilization, in my opinion, is Charles Darwin.”

Avio lets out a cry. A strange, wailing cry, and he flicks his fingers under his chin. Untranslatable.

“What is this Charles Darwin and his evolution?” he says. “There is no evolution of the species. I am not the same as a chicken or a cow or a monkey. I am Italian. We have always been Italians - from the start.”

“From the start? What start are you talking about?”

“The start start” he says. “We were seeded from space. By aliens. The aliens saw us and liked us – they copulated with us to produce new species.”

“Of course, I mean Italians!” he cries. “They call in and leave their seed here to develop and grow. Then they leave. We are not part of this evolution story that this Charles Darwin talk about. This Charles Darwin is Inglese. Basta.”