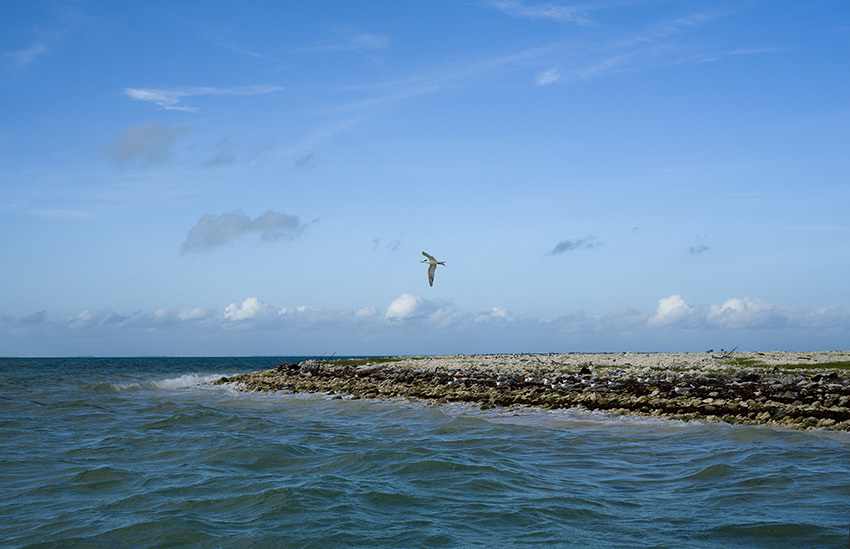 I was standing in a stall on the beach on Christmas Island, sheltering from the sun. The stall had an assortment of grass skirts on display, carved coconut jewellery, T-shirts, tins of corned beef, necklaces, wooden bowls, postcards, and a 19-inch television set. In the corner was a large Kiribatian man, the stallholder, fast asleep - insensible to the tourists, locals, school children, and pigs jostling around him.

Why a television, I thought, on a beach amongst T-shirts and corned beef, grass skirts and jewellery? Who would want to buy it? How much did it cost? I suddenly wanted to know. Needed to know. I leant close to the sleeper and said, “Excuse me.” He didn’t move. “Excuse me,” I repeated more loudly, and gently shook his arm.

He opened an eye, and closed it again, then clearly conducted a debate behind closed eyes. ‘Do I wake up and speak to this funny palagi in funny shorts? Or do I go back to sleep?’ The entrepreneur, the commercial dynamo in him, obviously won. He opened both eyes and said, “Yes?”

“How much is the television set, please?” I asked.

“Ask her over there!” he said, waving at the stall opposite.

I went to the stall opposite and asked. Her-over-there said, “You’ll have to ask her in the office,” and she pointed at a two-storeyed shed up the beach.

Her-in-the-office listened to my question, picked up the phone and talked rapidly in Kiribatian. She replaced the receiver, stood, and said, “Follow me.” I followed. We arrived at another stall. “Ask her,” she said.

The woman looked at me, in what I now realise was pity, and said, “It’s not for sale. It’s my auntie’s.”

Later I discovered that there is no television station in the state of Kiribati.

Kiribati is pronounced, inexplicably to Europeans, ‘Kiribass’. Christmas Island, or Kirimati, is pronounced ‘Kirimass’, the local version of Christmas.

Captain Cook arrived Christmas Eve 1777, named the island, and promptly left. The United States claimed it in 1856. The British, to the fury of the Americans, annexed it in 1888. Father Emmanuel Rougier, an imposing, bearded, French priest, leased the island in 1917, planted 800,000 coconut trees, and issued his own stamps. In 1939 the island reverted to Britain then finally became part of the independent state of Kiribati in 1979.

The island of Kiribati is a must-visit place – nowhere is the land over ten feet above sea level; half of it consists of a beautiful, green and blue lagoon that teems with fish and marine life; it has up to six million birds, some of which fly all the way from Alaska, including sooty terns, frigate birds, shearwaters, masked boobies, and Christmas Island warblers – not surprising – Kirimati is now a wildlife reserve.

But back to the beach – the post office didn’t sell stamps. The postmistress sold them from a stall on the beach. Next to the postcard stall. You bought your stamps and postcards, then wrote your cards at the post office – the only building with a table for writing on, and a post box – actually a slit in a wall, marked ‘Overseas’, in marker pen.

But best of all that day, that lovely day, there was the class of young boys, led by two three-year-olds, who danced and sang to us. When they’d finished, the boys walked fifty paces up the beach, picked up shells from the shoreline, returned, and sold them to the tourists. Who bought them, seemed pleased to buy them, even though they knew.

Christmas Island? “Nothing to do - no shops,” said some.

“Far too busy enjoying ourselves,” said I.

“An Italian is never on time,” says Avio, “except when he is meeting another Italian.”